The provincial government has approved the resignations of nearly 50 doctors across Punjab, a note said, in the wake of the raging coronavirus pandemic, of more than 230,000 infections and more than 4,700 deaths in Pakistan.

According to a note from the Department of Specialist Healthcare and Medical Education (SHCME), dated June 27, this year the 48 physicians who stepped down had tendered their resignations at different times of the 48 resigned, 11 had handed in their letters of resignation before Pakistan announced on February 26, 2020, the first case of coronavirus. Among the doctors who stepped down were 14 from the Mayo Hospital in Lahore, seven from the Jinnah Hospital, six from the Children’s Hospital, four from the Dera Ghazi Khan Teaching Hospital and three from the Lahore General Hospital.

Doctors throughout the country agitated simultaneously against the unavailability of personal protective equipment (PPEs), as well as the brutality endured by the officers at protests, and angered relatives of those who lost their lives to the deadly disease. A day ago, the Young Doctors Association’s Azad Jammu and Kashmir branch (YDA) said the group “would emerge stronger” a day after many physicians were “violently abused” and detained during a “peaceful demonstration.”

The YDA and the Grand Health Alliance (GHA) condemned the “non-democratic” behavior of the government in a joint press conference, with the GHA chair warning of a “country-wide movement” if the problems of healthcare professionals were not resolved.

“Attack against young doctors would only empower us,” YDA president Kashmir said, while YDA Punjab ‘s Dr Salman stressed that if the problems were overlooked, they will “conduct a sit-in in front of the Kashmir House in Islamabad.”GHA Punjab President Dr. Fazle Rabbi stated that doctors were dying of coronavirus because hospitals were not supplied. 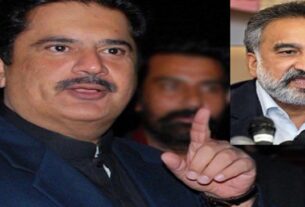 ZULFIQAR MIRZA HAD GIVEN OPEN LEAVE TO CRIMINALS