Turkish President Recep Tayyip Erdogan addressed Pakistan’s stance on Kashmir issue in an address to the 74th session of the UN General Assembly.

In his address, Rajiv Tayyip Erdogan said that Kashmir has been waiting for a solution for 72 years. He said that despite UN resolutions, 8 million people were detained in occupied Kashmir. In South Asia, stability cannot be separated from Kashmir.

We can’t hear it. It is important to listen. You have to support them in all sorts of situations.

In his address, he also expressed his stance on Palestine. He showed the Palestinian map in the General Assembly, saying that despite the occupation of almost the entire country, the lure of Israel has not yet ended and it wants to return to the left. 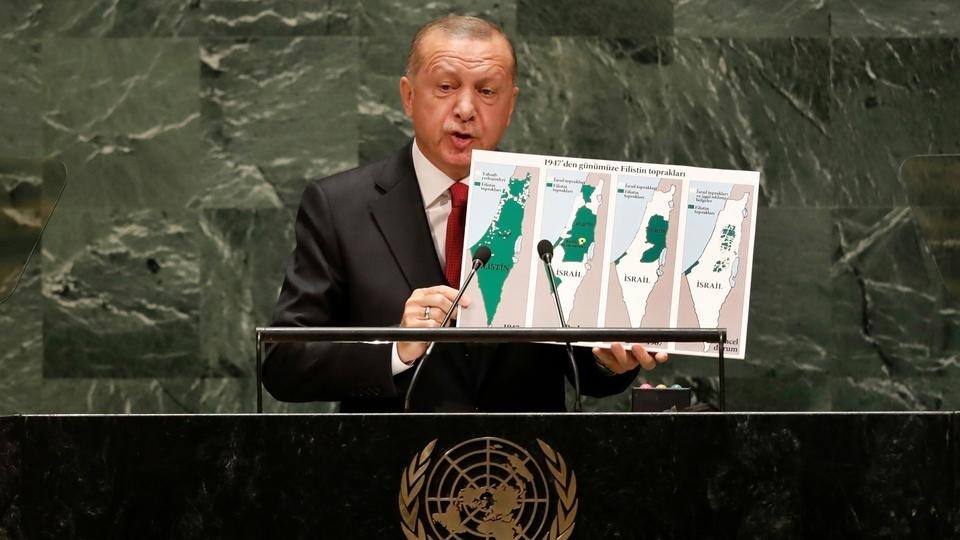 The Turkish president said what role does the United Nations have with Israel when its resolutions are not implemented? Transferring these resolutions to move the capital to the Holy Spirit is like slapping the mouths of the nations.

“The World Is Greater Than Five”

In his address, he called Turkey the voice of humanity under the shadow of injustice.

“Turkey becomes the voice of the oppressed”

The Turkish president said that the heartache of the Syrian child, the grief of the Gaza orphans, the grief of the father who could not provide bread to the children in Yemen and Somalia, and the difficulties faced by the Kashmiri brothers is in our hearts.

Tayyib Erdogan added that Turkey, as in the past, still stands against the oppressor and oppresses without discrimination of color and race.

He further said that Muslims are like one body, as per the Prophet’s (S.A.W.W) command. If there is pain in any part of the body, the whole body feels hurt. Wherever in the world, the Muslim brethren must feel the pain of each other.